Is There Radiation in Drinking Water?

Posted on by in Blog, Radiation, Water with Comments Off on Is There Radiation in Drinking Water?

Drinking water contains radionuclides of natural origin. They are present in different amounts and might be dangerous in high levels. Radiation is released from rocks and minerals. 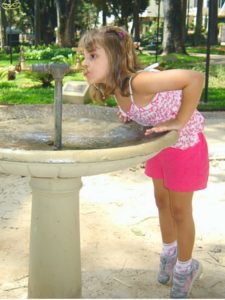 The thorium232 series is also presented in nature. Thorium can be rarely found in water. Although it is 3-4 times more abundant than uranium in the crust, it has poor solubility. Radium-228 (228Ra) belongs to this nuclide family and its presence in water is quite problematic since its radiotoxicity is relatively high. Potassium-40 (40K or K-40) also has wide presence.

Tritium (3H, H-3 or T) is another radionuclide which can be found in nature. It is a cosmogenic hydrogen isotope, which is being formed in the high atmosphere. It can be found in rainfalls as tritiated waterl. It also appears in nature as a result of anthropogenic activities – research and nuclear facilities. Since tritium has a low radiotoxicity, it is not considered to be really dangerous for the human health.

Natural radioactivity is not the only danger. Exposed water reservoirs can be contaminated by artificial radionuclides which fall into rivers and lakes. Accidents and nuclear explosions usually cause significant contamination of waters. This is what happened in Tokyo during the Fukushima nuclear accident. For such cases, allowed levels of artificial radionuclides in case of emergency have been set.  On the other side, reference levels which give a non-significant dose to the population are set much lower than the emergency levels and are considered to be safe.

Human economic activities also cause radiation contamination. Radionuclides have been concentrated by non-nuclear industrial processes such as fertilizers production, mining, coal combustion and others.

How to Prevent Negative Effects on Your Health?

Scientists consider that daily intakes of vitamin D by adults in the range of 8,000 IU are needed to help the body cope with radiation. It is even better is to get your vitamin D from sun exposure rather than taking oral supplements. Read more how vitamin D could help you prevent health problems cause by radiation.

The following plants and supplements are also believed to be useful to prevent health problems because of radiation: kelp, fulvic acid, coconut oil, spirulina, ginseng, whey, selenium, magnesium and others. As a general rule, your immune system has to be strong in order to cope with the sources of radiation and to keep your body healthy.

Faucet Water filters and other household adapters such as a water softener shower head can help you have clean and safe water at home, click here to find out more. Knowing how to filter radiation is the way to keep yourself and your family protected from the danger of high levels of radiation in the water your drink. This problem is often neglected by governments and people and you are the one who needs to take measures to preserve your health.